Conversation with the Honourable Catherine McKenna 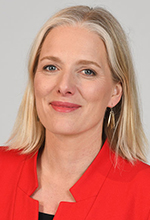 In Canada, we think big. That’s because we are big.

To survive and thrive in the upper half of North America, we have always had to build. That was true when we pushed the railway across the continent. That was true when we built the Trans-Canada Highway and the St. Lawrence Seaway. We found a way. Today we call this “infrastructure.” It’s really about building what we need for the future we want.

We are moving forward with an ambitious plan for modern, sustainable infrastructure – more public transit, renewable energy, high speed broadband – to restart our economy and help create a million jobs, to support vibrant and inclusive communities, and to drive to net zero emissions and ensure a cleaner future for our kids.

In 2015, Catherine McKenna was elected the first female Member of Parliament for Ottawa Centre and appointed Minister of Environment and Climate Change. She was re-elected in 2019 and serves as Minister of Infrastructure and Communities.

Catherine is a long-time resident of Ottawa Centre, is a mother of three, and is an avid swimmer and canoeist.

As the Minister of Infrastructure and Communities, Catherine is responsible for overseeing the historic Investing in Canada Plan designed to create economic growth, support a low-carbon, green economy and build inclusive communities. Her mandate includes leveraging private sector capital to build infrastructure in the public interest, whether that’s by working with the Canada Infrastructure Bank or addressing our country’s long-term infrastructure needs and priorities.

As the former Minister of Environment and Climate Change Catherine helped negotiate the Paris Climate Agreement, negotiated Canada’s first comprehensive climate plan with a national a price on pollution, announced a ban on single-use plastics by 2021, expanded parks and protected areas across Canada, and brought in the Impact Assessment Act to better protect the environment and build a stronger economy. As Minister of Infrastructure and Communities, she is working with communities across Canada to build thousands of projects, creating jobs across the country and building a cleaner, stronger and more inclusive country.

Catherine previously worked as a lawyer in Canada and Indonesia, was a negotiator with the UN peacekeeping mission in East Timor, taught at the Munk School of Global Affairs and co-founded the charitable organization Level Justice. She earned degrees from the University of Toronto, the London School of Economics, and McGill Law and is called to the Ontario and New York bars.

Members
This event is free for members

Presented in partnership with: